Flying from London to Munich 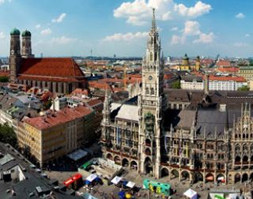 Art, food, football - fun. While it may lack the appeal of Berlin, Germany's second city is becoming an increasingly popular tourist destination for European backpackers - and getting there by flight is cheaper than ever before.

At an average of less than two hours, London to Munich is one of the more comfortable trips you can make between two major European cities.

Germany's Lufthansa - the largest airline in the country - has cultivated a largely favourable reputation both for affordability and comfort (economy class travellers are offered meals as well as some complimentary drinks). Bear in mind, however, that there is a considerable booking charge to bear unless you source your tickets directly from the airline's official website.

easyJet and RyanAir also run discount services from Gatwick and Stanstead, although with the latter it's important to note that they will drop you off at Munich's secondary airport (which is not strictly in the city at all), so you will need to prepare to pay some additional money on travelling to your base.

Munich is served by two airports. In the hub of the city, there's Munich Airport (MUC). Listed among the busiest airports in the world, MUC sees traffic of around 40 million passengers annually. Despite this, there are only two terminals, so getting out the other side isn't exactly hassle-free.

In better news, there's a railway station within walking distance of both terminals (in fact, technically it's within the airport grounds), so you needn't worry about hitching a ride into town once you step off the plane.

To the west of the city there's Memmingen Airport, which is mainly fed by discount carriers like RyanAir and easyJet. This option does not exactly come highly recommended unless you're planning to travel around the whole of Bavaria. In truth, to call it a Munich airport is more than a little misleading - it's actually nearly 70 miles from the city.

Must see in Munich

Whether you are on business or as a tourist in Munich, there are some must-see places that you shouldn't miss on either of your purposes.

1. Munich Residenz - spectacular palace with lovely gardens. You can get admission to see the whole of it including Treasury and Cuvilliés Theatre for 17 euros.

2. Marienplatz and the Neues Rathaus - this Munich's central square where you can see the old and new city halls and many more interesting buildings and architecture.

3. Frauenkirche - large Gothic cathedral finished in 1488. Everyone is saying that the footprint left by the door is by the devil after he came to see it.

4. Englischer Garten (English Garden) - largest sity park in Munich covering the grounds of 910 acres. There is a big artificial lake giving the park a natural landscape look. It attracts many joggers, cyclists and walkers with 78 km of paths and walkways.

5. BMW Museum - it's a must for automotive fans! Very close to the Olympic park and BMW's headquarters, you may spend a whole day looking around.

In view of the above, your best bet is flying with Lufthansa. Yes, they are a little rigid with booking fees and ticket refunds, but you're paying for quality service from a German airline with a base at Munich Airport.

There isn't much price volatility in tickets as the Munich tourist scene has only a small correlation with the weather. For a one-way trip, you can probably expect to pay in the region of £70 (depending on how far in advance you book, and of course whether you source this directly from Lufthansa or via an all-inclusive travel agent package).

You can fly to Memmingen for as much as half of that, but you're going to be making up the additional cost through travelling into the city (not to mention the fact that a good chunk of your trip will be wasted once you do get there). Munich isn't as expensive as Berlin and has a bustling hostel network - be sensible and you can make your budget work without having to use a discount carrier.