Flying from London to Marrakech 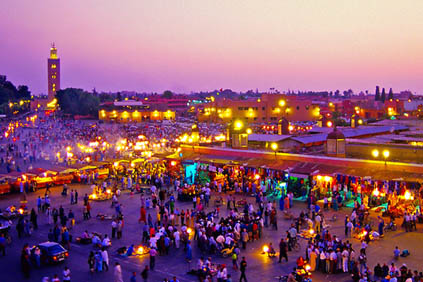 If your annual summer holiday in the Costa del Sol isn't setting the pulses racing anymore, a couple of weeks in Marrakech could be right up your street.

Whether you're exploring the ancient ruins of El Badi Palace or watching a snake-charmer in action at the lively Jemaa el-Fnaa Square, Morocco (especially the mid west) is one of the few genuinely enchanting holiday destinations left in the known world.

Up until the mid-2000s, Royal Air Maroc had a firm monopoly on flights between Western Europe and Northern Africa, but the market has slowly opened up to low-cost carriers as protectionist economics begin to disappear from the region.

This means Royal Air have started to shed their reputation for opulence: the cabin crew are still plenty attentive and the food and drink better than most, but comfort is no longer a priority. And neither, apparently, is punctuality - passengers have directed criticism at the airline for being late in recent years (although this appears to be somewhat exaggerated).

Our tip: Marrakech is a two week holiday rather than a weekend getaway, so you'll need plenty of luggage. When the alternatives are RyanAir and easyJet - especially for a near three hour flight - you're better of sticking to reliable carriers like Royal Air, BA and Thomson.

The good news is, at a little under two miles away, Marrakech Menara is right on the city's doorstep. A newly renovated airport with two large terminals (and a third on its way), Menara has been designed to help ease the flow of three or four million passengers a year - and heavy congestion is surprisingly infrequent when you consider the volume of traffic.

Although it's only a short trip, walking into the city centre into Morocco's sweltering temperatures probably isn't a great idea. With no train service, your best bet is getting one of the air conditioned buses that run every half hour (you can also try for a taxi, but they can be a little pricey).

Top things to do in Marrakech

- Palacio da Bahia - you won't even need a guide in this palace and you will see great historical architecture.

- Medina of Marrakech - it's a UNESCO protected heritage site and an amazing shopping site. You can buy literally anything there.

- Koutoubia Mosque - built more than 800 years ago, this was the first mosque in Morocco.

If you're on the lookout for some winter sun, Marrakech and its low twenty new year temperatures is an ideal destination. Flight prices around this time drop to £50 for a one-way ticket. In the summer, expect to pay double this - if not more.

Hotel prices in Marrakech are steep, but the service is exemplary: a similarly opulent room in say, London or Paris, would put a far bigger hole in your wallet. This being the case, we recommend going for a travel agent package instead of trying to plan your trip independently (there's still plenty of spontaneity to be found out in the city's bustling street markets).