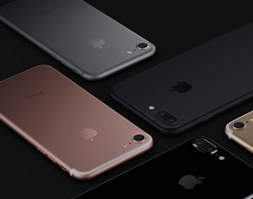 The iPhone 7 was supposed to be one of the most hotly anticipated tech releases of 2016, but now that the obligatory launch hype has died down a little, has it really hit the heights we expected? Here's everything you need to know about Apple's latest smartphone.

Display: The screen resolution is an impressive 750p. This is a fantastic effort for such a small device but if video streaming is your thing then you're better off opting for the Plus model, which supports a larger and shraper screen.

Camera: Unfortunately, there have been only minor improvements made to the iPhone's camera, which is still a disappointing 12 megapixels (compared to the 16MP lens available with Samsung models). Image stabilising is a little better, however, and it's also easier on the battery.

Interface: The main change to the Apple interface is that the traditional "home" button is no longer a physical button at all; it's been replaced by a touch-screen clicker, which peforms different functions depending on the pressure you apply, and vibrates when you make a purchase.

Battery: Minor improvements have been made to the iPhone's battery: it takes slightly longer to drain and you won't be plugged into the wall as often, plus it's more efficient which means you can use the camera and watch videos without draining the power bar too much. That being said, it still lags behind other smartphones on the market.

Audio: Apple have taken the bold step of removing the headphone jack from the iPhone 7, which means you have to put your faith in AirPods (the main companion accessory to this year's release). The audio quality has remained high but there are bound to be teething issues with the wireless switch - particularly with regards to hands-free calls. To compensate, they've also added an extra speaker to boost the output.

Looks: Aesthetically, the new iPhone is more or less the same as it's ever been, except the body is just a little slimmer thanks to the headphone jack being removed. It's also available with a slick jet black finish this time, but this cool look is easily ruined by scratching and musky fingerprints unless you're super careful.

Other features: The iPhone 7 has made a few minor software improvements. Siri integration on third party apps has been improved, for example; this means you ask your personal assistant to search the web for you, and even take pictures without having to click anything. Apple have also added contextual word predictions, which really improves user experience when you're composing a text message.

Price: Despite the improvements being relatively minor in most cases, the iPhone 7 still retails at a whopping £600 - and that's just the standard 32GB model. If you're looking some extra memory space, the 64GB and 128GB will set you back £700 and £800 respectively.

Overall: In some areas, Apple have caught up to their competitors - but they still haven't fitted their flagship phone with a camera worthy of a Samsung model, nor a battery life capable of matching Android one. If you're looking for anything beyond minor improvements, you might want to look to a rival brand.