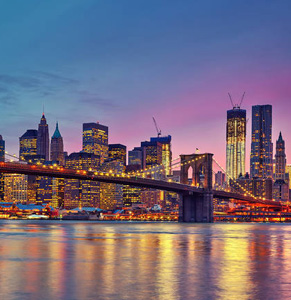 Experiencing The Big Apple on a shoestring budget used to be a pipe dream. For years, only the most wealthy or important of us could ever afford to head west out of Heathrow.

But times are now rapidly changing. After a decade of umming and ahhing, budget airlines are finally beginning to roll out transatlantic flights, with trips to New York now costing just a fraction more than we pay to holiday on the continent.

Here's our guide to finding a winning deal.

When should I travel?

The ever-reliable SkyScanner - which aggregate flight prices from all of the major carriers - suggests that the cost of a trip to New York is broadly consistent across the year, with a notable spike over the summer months: July and August.

Keep in mind, however, that hotel prices in the city are likely to be high over Christmas and New Year period, owing to the preponderance of domestic tourists heading to America's east coast to visit family or spend the holiday period in the snow.

Incidentally, occasional bursts of extreme weather in New York can sometimes mean flights being cancelled. Generally, disruption is handled pretty well - but it's something to consider if you're planning on a short, time-intensive weekend away.

Have in mind that booking 2 to 4 months in advance may save you up to 40% off the price. So be prepared and do some research before choosing the exact dates.

Which airlines fly to New York?

As above, there are a growing number of airlines running flights from the UK to New York, ranging from no-frills budget options to spare-no-expenses luxury.

If you're looking to pinch the pennies, your best bet is plumping for a Jet2, a discount carrier which flies out of Newcastle, Glasgow, Leeds-Bradford, Manchester and East Midlands. You can expect to pay in the region of £400 for a return ticket.

The cheapest option, however, is Norwegian - the airline responsible for kick-starting budget transatlantic getaways. From London, you can fly out from as little as £330 if you book at the right times, with these prices potentially set to drop over the current years amid growing demand.

That said, there's nothing wrong with a bit of luxury if you can stretch to it. In some ways, the rise of budget alternative has actually forced traditional carriers like British Airways and Virgin Atlantic to improve their service. Fly with one of those and you're probably looking at a minimum of £500, although plenty will favour the extra leg room for a long-haul option with no stopover.

What about indirect flights?

As with Britain's train services, travellers have often found that indirect flights to their intended destination actually prove cheaper than flying from A to B.

If you're prepared for a longer trip - and a potentially frustrating waiting period on your stopover - then it's worth seeing if you can find a cheap flight over to Oslo, and then taking another one from there to New York.

Because of different law in Norway and levels of demand, flights out of the EU are often ran at a different cost, which means that pasengers get a better deal (and they needn't worry about having to get an additional visa for this purpose either).

Using this option, you could get away with paying as little as £270 a pop at optimal travel times.